All that glitters is not necessarily gold. Sometimes it’s an idea, a little networking, and a softball-sized rhodochrosite from the University of Arizona Department of Geosciences. 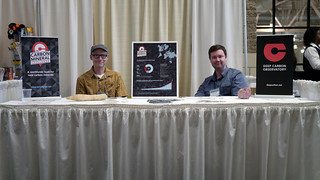 Josh Wood and Daniel Hummer (l-r) are prepared for another day at the 2016 Tucson Gem and Mineral ShowUsing statistics, scientists predict the likely existence of roughly 145 carbon minerals on Earth that, so far, mineralogists have not described. The goal of the Carbon Mineral Challenge is to mobilize amateur and professional mineral collectors worldwide to look for these missing carbon minerals. Thus as a chiefly citizen science effort, a table the Tucson Gem and Mineral Show made sense. By the end of an exhausting first day, it was clear that the world of gems and minerals is populated by all manner of humanity. The floor was shared by mineral dealers, geophysicists, geochemists, statisticians, curators, industry geologists, gem cutters, jewelers, tourists, and many generations of mineral collectors of varying degrees of expertise, all of whom share a passion for the beauty and diversity of Earth’s treasures. The show provided the perfect stage to inform and mobilize these key audiences to help find the approximately 145 missing carbon minerals. 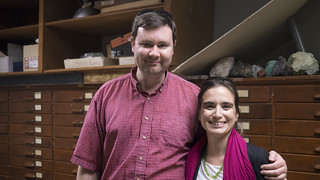 Carbon Mineral Challenge project investigators Dan Hummer and Barbara Lafuente pose in the University of Arizon'a Department of Geosciences teaching lab.The four-day main event at the Tucson Convention Center was the culmination of over two weeks of gem, mineral, and fossil showcases involving nearly 4,000 vendors at 43 different locations throughout the Tucson area. A visitor could walk away with anything from a humble jasper bead to a $75,000 crocoite. Minerals were sold by the gram and by the specimen, with some of the showstoppers valued in the hundreds of thousands of dollars. The most extravagant displays required armies of trained staff to pack, and transport the treasures.

Among the show’s visitors were Carbon Mineral Challenge Advisory Board members, including Raquel Alonso-Perez (Harvard Mineralogical & Geological Museum, USA). Hummer assembled this cast of mineralogists from around the world to represent the Mineral Challenge in their respective regions. The advisory board members are ambassadors for the Challenge, distributing information and generating interest in a program that must to be truly international to succeed. 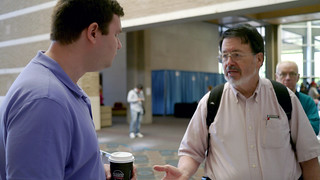 Hummer chats with Boston Mineral Club president Nathan Martin about the club's upcoming meeting.The team also made key connections with figures in academia and mineral clubs from around the world. Some requested info packets for their geosciences departments and meetings.  A couple of DCO Science Network members stopped by to say hello, and a promising new mineral sample was dropped off, courtesy of Anthony Kampff (Natural History Museum of Los Angeles, USA).

Perhaps most inspiring were the school kids from Tucson, who live in a region rich in metals and minerals and were already developing knowledge and collections of their own. A few pieces of calcite, a calcite stalactite, and a large rhodochrosite borrowed from Robert Downs’ University of Arizona Department of Geosciences lab offered an easy way to demonstrate the diversity of even the more common carbon-bearing minerals. 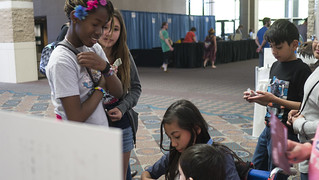 The optical peculiarity of calcite was a popular feature at the tableVisitors of all generations were surprised to learn that we still discover new minerals. Many assumed that we know all there is to know about minerals, and were amazed at how incomplete our picture of Earth actually is. With the discovery of every new carbon mineral, the Carbon Mineral Challenge hopes to fill in a little more of this picture. 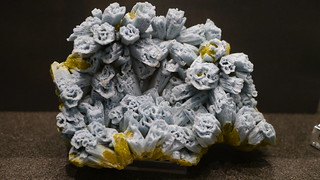 Since December 2015, when the Carbon Mineral Challenge launched, amateur collectors and…

DCO Highlights Of Meteorites and Mines: Recent Highlights from the Carbon Mineral Challenge