DCO scientists presented over 150 scientific papers at the American Geophysical Union (AGU) Fall Meeting in San Francisco on 14-18 December 2015. The meeting took place at the imposing Moscone Center in the heart of San Francisco, USA, and played host to nearly 24,000 Earth scientists from around the world.

DCO Executive Committee member Claude Jaupart (Institut de Physique du Globe de Paris) received the Harry H. Hess Medal. This prestigious medal is for “outstanding achievements in research on the constitution and evolution of the Earth and other planets.” Jaupart’s contributions include the physics of volcanic eruptions, igneous processes in magma chambers and intrusions, geodynamics, in particular related to mantle convection and the role of continents, and heat flow in Earth. Full award citation here. 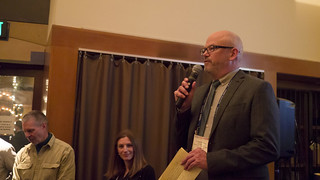 DCO leadership recognized the many contributions of early career scientists at a DCO Celebration event (hosted by the DCO Secretariat and Engagement Team) on 15 December 2015. Jonathan Fellowes (University of Manchester, UK), Donato Giovannelli (Rutgers University, USA), and Fátima Viveiros (University of the Azores, Portugal) received the DCO Emerging Leader Awards. The award, a certificate and slab of carbonated peridotite donated by the Oman Drilling Project, recognizes early career scientists who have contributed to the burgeoning field of deep carbon science through their publications and active leadership in the Deep Carbon Observatory. 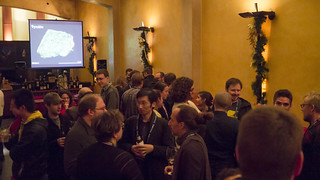 “Greater Than the Sum of Its Parts,” a video about the 2015 DCO Modeling and Visualization Workshop in Washington, DC, USA, was selected for inclusion in AGU’s science film festival, AGU Cinema. The video, produced by the Engagement Team, was shown alongside contributions from IODP, USGS, and independent filmmakers.

At the DCO Celebration, members of the DCO Science Network were treated to a sneak peek of the Carbon Mineral Challenge: A worldwide hunt for new carbon minerals. The Challenge, based upon the work of DCO Executive Director Robert Hazen and colleagues, is mobilizing professional and amateur mineral collecting to look for Earth’s “missing” carbon minerals.

Hazen and colleagues predicted that there are 145 carbon-containing mineral species on Earth that scientists have yet to describe. The goal of the Challenge is to focus the mineral collecting world on finding these minerals, which might be hiding in existing collections or awaiting discovery in the field.

The next day, Hazen and colleagues Daniel Hummer (Carnegie Institution of Washington, USA) and Barbara Lafuente (University of Arizona, USA), officially launched the Carbon Mineral Challenge at an AGU press workshop. An in-depth feature on the Challenge by Maya Wei-Haas appeared on Smithsonian.com the next day. Elizabeth Wilson’s article for Chemical & Engineering News appeared on 18 December 2015. Wilson’s article was subsequently picked up by Scientific American. Visit mineralchallenge.net for more.