Most textbooks teach that the hydrocarbons in natural gas and oil deposits form from organic remains of long-dead organisms. Even the term “fossil fuel” brings to mind prehistoric plants and animals that lived millions of years ago. Russian geologists and chemists, however, have long championed the idea that abiogenic hydrocarbons also occur, and some recent studies support this idea.

Rather than forming from living material, abiogenic hydrocarbons form from inorganic reactions occurring deep in the subsurface at high temperatures and pressures. A new study finds that these reactions likely occur at more shallow depths than previously thought, as well.

“Now we see that hydrocarbons can form across a wide range of mineralogical and thermodynamic parameters,” said Mukhina. “We now know that this process is not just possible, but possible almost everywhere in the mantle.”

In previous work, Kutcherov’s group showed that abiogenic hydrocarbons can form at conditions within Earth’s mantle from a source of inorganic carbon and a fluid containing hydrogen. Simulations and lab experiments predicted that these processes occur at temperatures around 1,000 C° and pressures of 5 GPa, which is 45 times greater than the pressure at the bottom of the Mariana Trench, the deepest spot in the world’s oceans. The new study, however, suggests that abiogenic synthesis can occur even at lesser temperatures of 280 to 300 °C and pressures of 2 to 3 GPa.

“Now we see that hydrocarbons can form across a wide range of mineralogical and thermodynamic parameters,” said Mukhina. “We now know that this process is not just possible, but possible almost everywhere in the mantle.”

The experiments show that abiogenic hydrocarbons may be forming within the subducting plate, where the edge of a tectonic plate sinks beneath another plate into the mantle. The water and carbonate compounds in the slab may provide the ingredients for the hydrocarbons, which could potentially migrate along the edge of the slab toward the surface to collect in oil and gas deposits, or emerge from volcanoes.

For their experiments, the researchers combined equal amounts of calcium carbonate, iron oxide, and water into a capsule and exposed the mixture to a range of temperatures and pressures to simulate the upper mantle. They placed the capsule into a toroid chamber, which enables them to simultaneously heat and squeeze a sample about half the size of a sugar cube. After an hour, the researchers analyzed the new compounds that had formed using gas chromatography, a technique that separates and identifies chemical compounds in a mixture based on how rapidly each component moves through a column within the instrument. The experiments yielded primarily methane, but smaller amounts of ethane, propane, butane, pentane, hexane, and even benzene.

Mukhina points out that these processes likely occur at an even wider range of pressures and temperatures than demonstrated in their laboratory experiments. The limitations on lab-created conditions, however, prevent them from testing pressures lower than 2 GPa. In future work, the group will explore ways that these hydrocarbons can migrate through the subsurface.

“Very soon, people will pay more attention to hydrocarbons because the importance of their role in the global carbon cycle is becoming more obvious,” said Mukhina. “It appears that there is much more hydrocarbon in the deep Earth than considered before.” 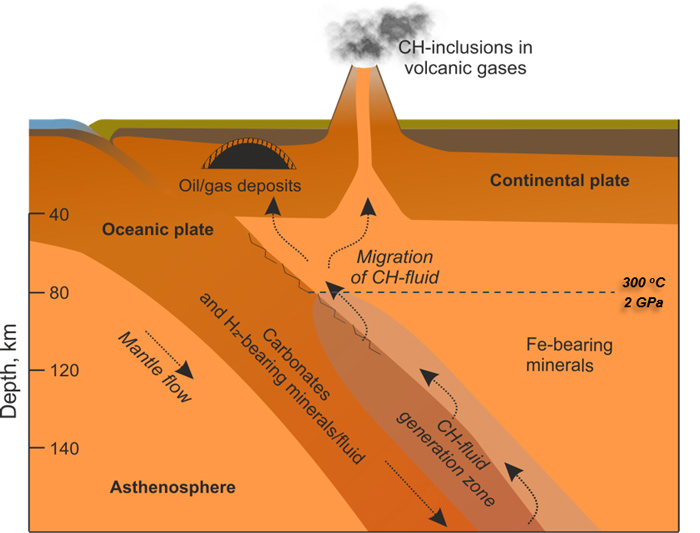 Hydrocarbons may be formed in the subducting slab from inorganic carbon and hydrogen-bearing fluids. These hydrocarbons likely migrate to the surface to collect in oil and natural gas deposits or erupt through volcanoes. Credit: Image courtesy of Elena Mukhina.

The researchers sampled the hydrocarbons formed within the toroid-type chamber and analyzed them through gas chromatography. Credit: Image courtesy of Elena Mukhina.

A new project called DeepSeep seeks to estimate the amounts of hydrogen, methane, and other…

Experts say scientific understanding of deep hydrocarbons has been transformed, with new insights…