Send questions or comments to the scientists by emailing Katie Pratt of the DCO Engagement Team, who will be onsite recording the investigation.

Poás volcano is one of several active volcanos in Costa Rica. With effusive fumaroles and a hyper-acidic crater lake, this site is a critical piece of the Biology Meets Subduction expedition. On Friday, 24 February, members of the team began their final hike into the crater.

Sampling in an active volcano is challenging. Climbing down into the crater involves a steep descent over unstable, rocky terrain. And once in the crater, the team had to work quickly and efficiently in order to minimize the time they spent at the site.

After an intense two weeks, climbing out of Poas with backpacks full of water, sediments, and gas samples marked a high point for the team. The thrill of adventure and achievement was palpable on the journey back to San Jose to begin the journey home.

Over the weekend we packed up our precious cargo. Gradually the team disbanded, reluctantly heading to the airport and shipping out. But, the researchers’ return is just the beginning! Back in their labs, the job of analysis begins. We’ll update deepcarbon.net with news from the team over the coming months.

The Biology Meets Subduction field team is large. With around 20 people in the field every day, there are all sorts of logistical challenges to tackle. At all times, safety is a priority. Before sampling in hydrothermal areas, for example, we ensure only people who really need to approach the sampling site do so to avoid the pools of scalding hot water beneath the thin, overlying crust. 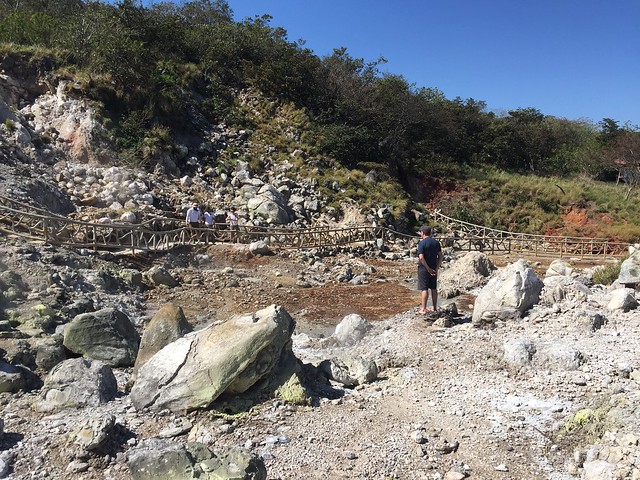 The team scouts a hydrothermal site at Miravelles.

Local knowledge is also key to the success of the expedition. Many of the springs we are sampling are in remote or inaccessible locations. Our local guide, Carlos Ramirez, has spent more than 20 years talking to members of the community to find these sites. Sometimes it has been necessary to hike through the jungle to reach our sites. But, we’ve also walked through a wedding reception, a farm, several resorts, and even found a tephra site along the side of the road. 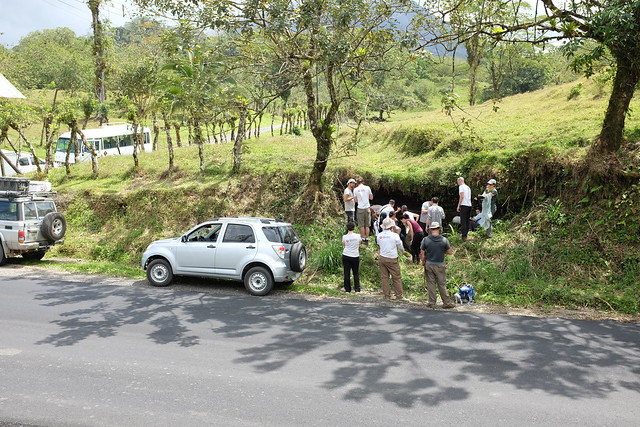 We’ve also had to make the most of any down time. Some members of the team have finished sample processing on the bus, while others have to wait until we reach the hotel. 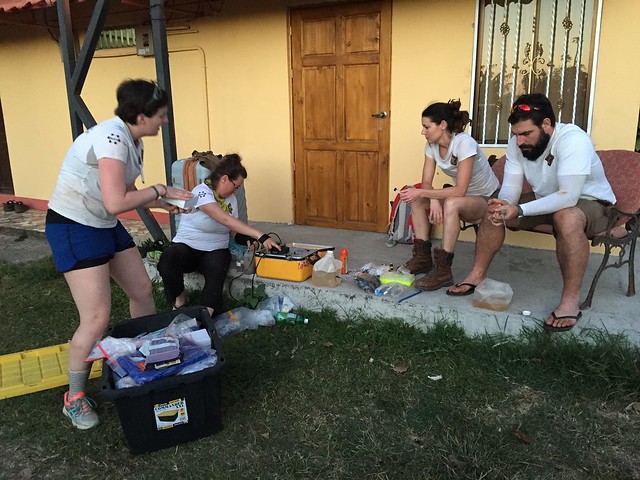 Tomorrow we head to our final site, Póas volcano and crater lake.

Week One of Biology Meets Subduction: Sampling the Forearc

View a Storify of the week 1 Tweets here. 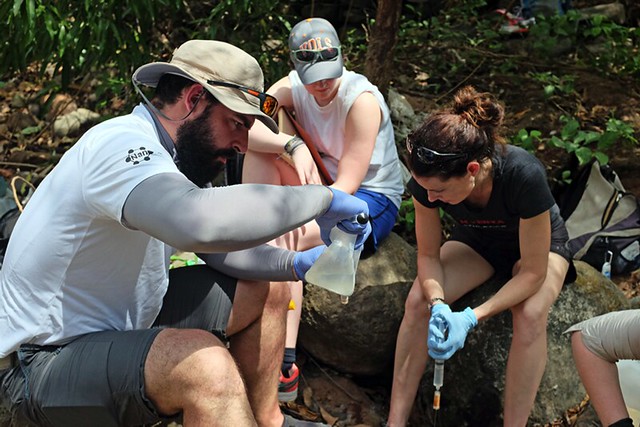 One of the challenges we’ve faced this week is figuring out the choreography of sampling. Every site is different. Some sites are small and can’t accommodate everyone at once. Others have features making them dangerous. Some sites are more exciting to microbiologists, while others appeal more to the microbiologists on the team than to the volcanologists. 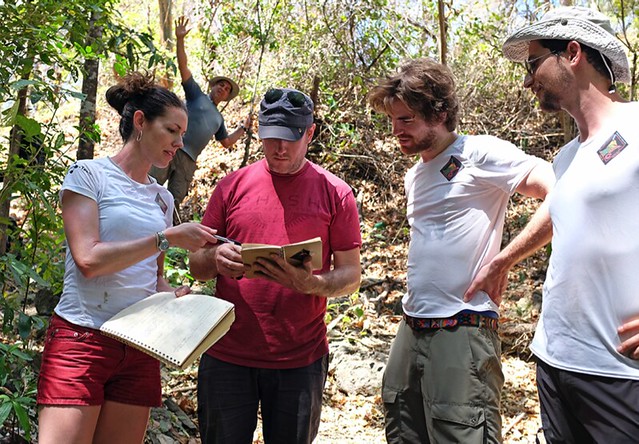 But, after seven days, we’re getting the hang of it. Upon arriving at each site, a scouting party figures out whether it makes sense to sample. Then, everyone swings into action, unloading the trucks and setting up the site. For most sites, it’s really important that whoever samples first does not disrupt the site for the next group. 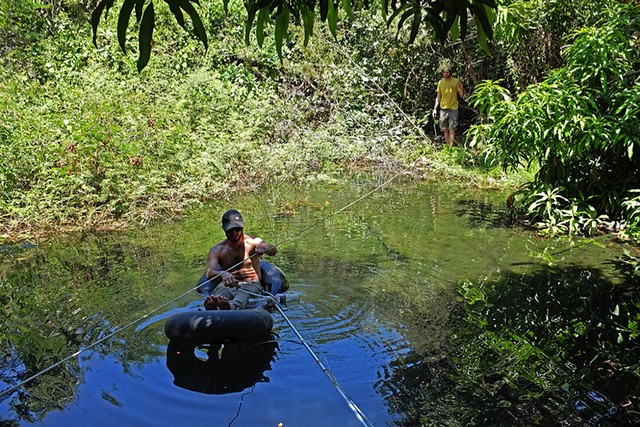 Maarten DeMoor floats out to the center of a spring to collect gas samples, careful not to disturb the sediments beneath the water.

It’s crucial that everyone works together so that we collect the samples efficiently and accurately. This applies to everything from coordinating sample labelling to sharing metadata and site information to jury-rigging a sampling float. 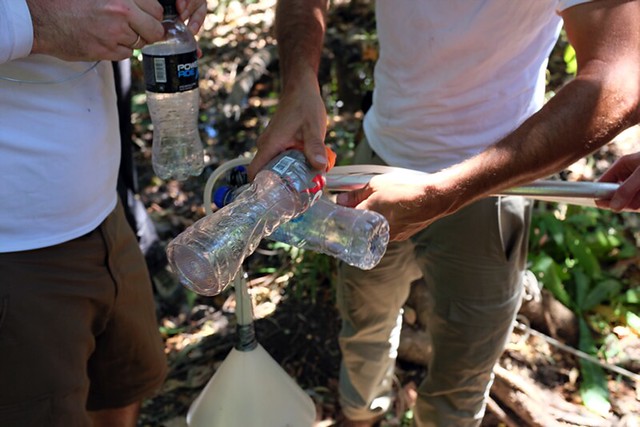 Empty drink bottles double as scientific equipment in the field.

This weekend the videography team also arrived in the field, adding another car to our convoy and three new faces to the group. The energy is high as we head into week two and on to the volcanoes of Costa Rica. 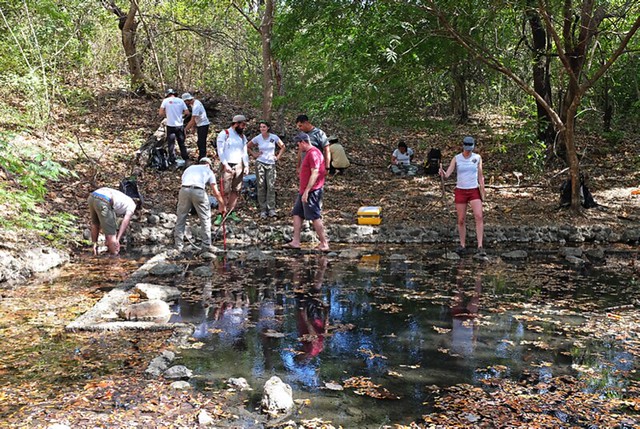 The team working together at Salitral el Rincon.

Step one in any field expedition is getting your weird-looking luggage on the plane. That’s how Karen Lloyd’s trip to Costa Rica began, convincing the pilot that the dry shipper, necessary for transporting biological samples, was safe. 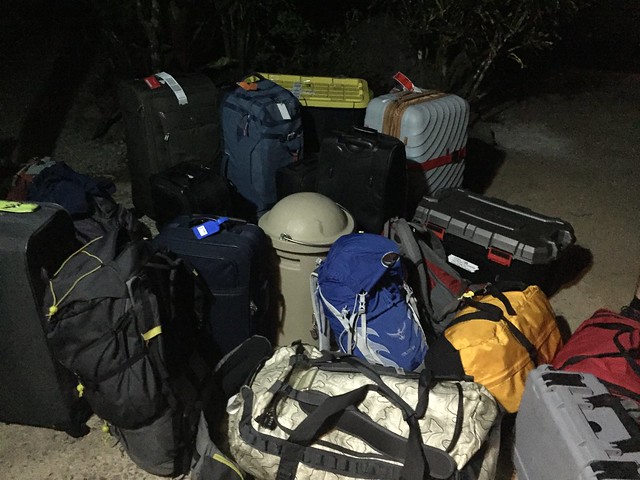 15 scientist have a lot of gear!

But, it made it, and with all the gear safely on the bus, the Biology Meets Subduction team headed north from San Jose to the first site, Quepos hot springs. The team spent the evening preparing for the field, packaging up carefully labeled sampling vials. 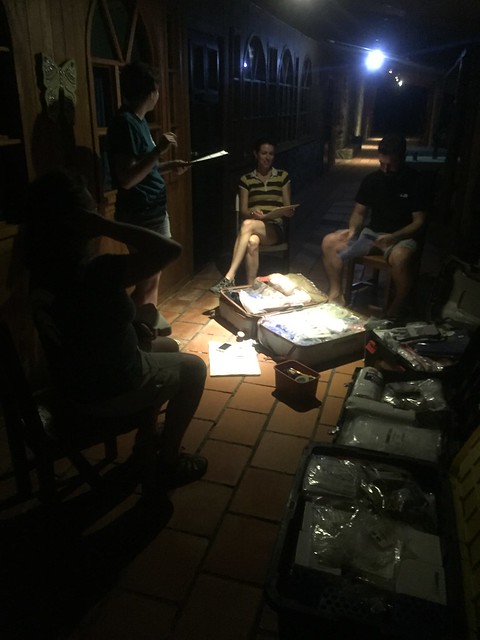 The next morning, with a plan in place and covered in bug spray, the team headed into the jungle. 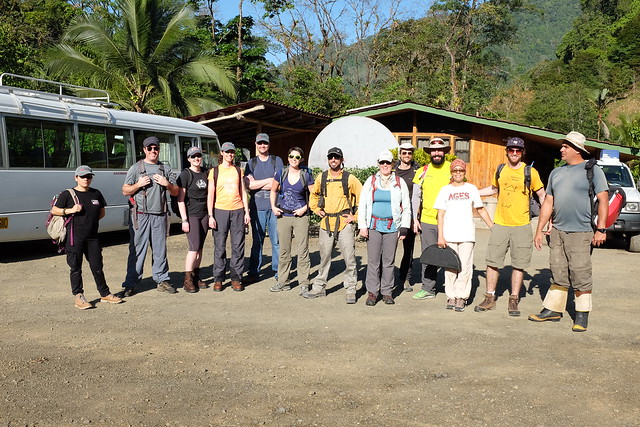 Biology Meets Subduction is a rare opportunity.  The members of the team are spending two weeks with scientists from very different disciplines. Wading across rivers and climbing slippery embankments was punctuated with lively conversations about subduction, forearc degassing, and microbial diversity. 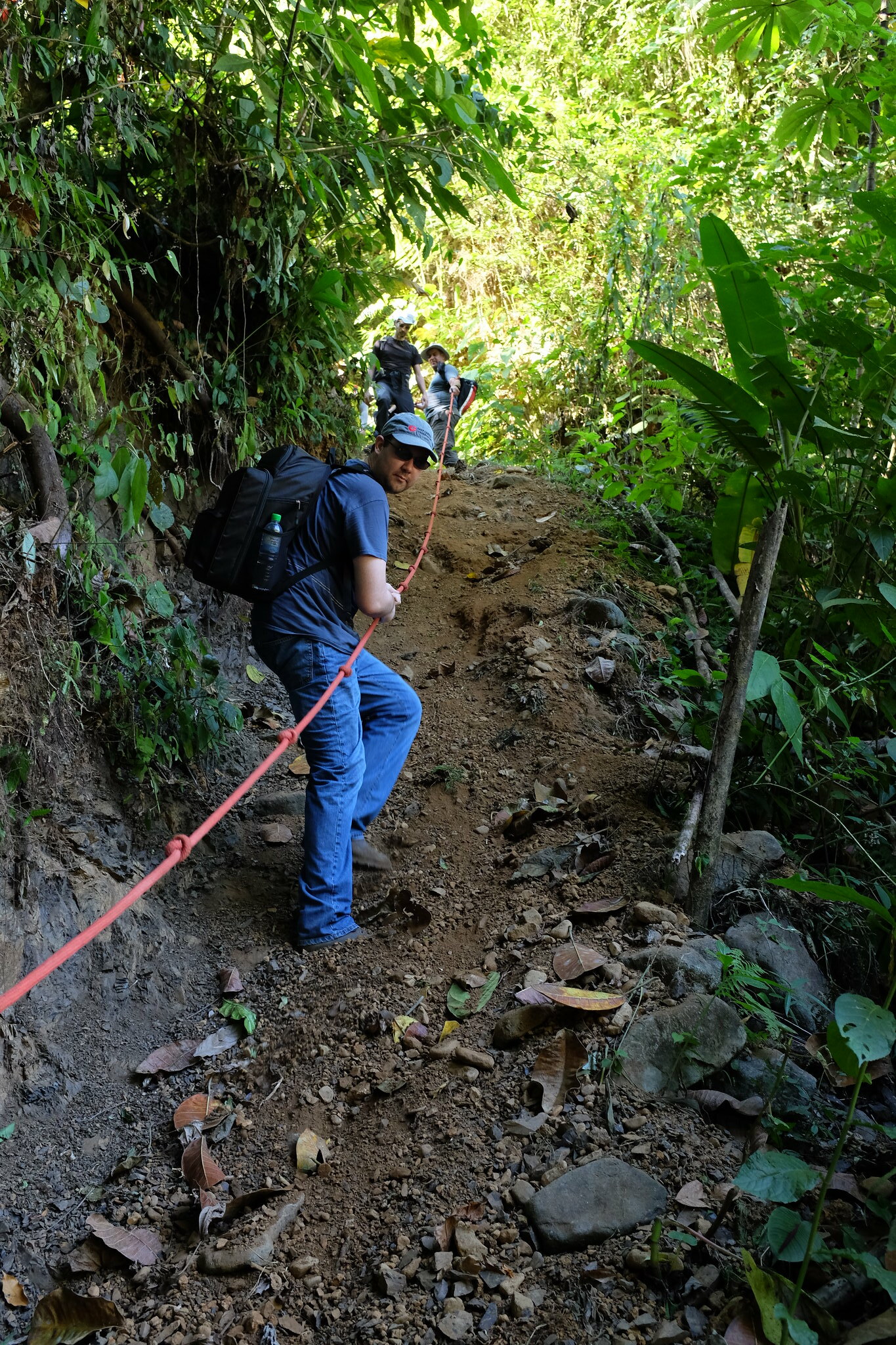 Hiking in to the first site.

Sampling for so many different analyses has its challenges. It’s important that everyone works together to avoid contaminating other scientist’s sites. We expected day one to be slow, while everyone got used to the sampling plan, but with a team of experience field scientists, it all went without a hitch. 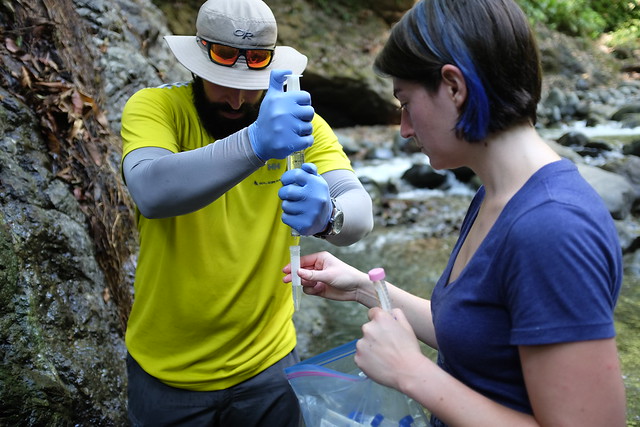 With morale high and a haul of valuable samples from Quepos, the team loaded up the vehicles and set off for the next site.

First Video from the Field 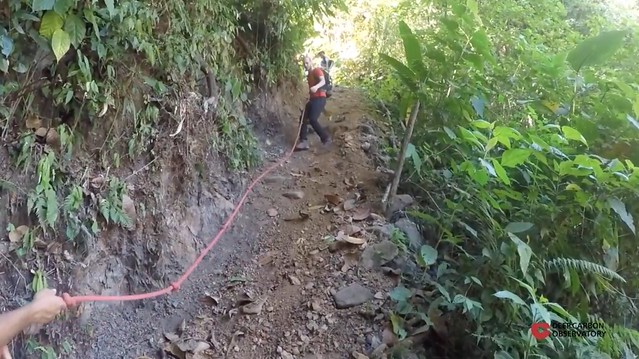 The team will visit springs near the Nicoya peninsula in addition to several volcanic centers over the course of 12 days. Costa Rican scientists will play integral roles in the logistic and scientific success of the field campaign, with Carlos Ramirez from the University of Costa Rica leading the charge. The local team also includes Gino Gonzalez from the University of Costa Rica, and J. Maarten de Moor, Maria Martinez, Monserrat Cascante, Yemerith Alpizar, and Ricardo Sanchez from the Observatorio Vulcanológico Y Sismológico de Costa Rica, Universidad Nacional, Costa Rica  (OVSICORIO-UNA).

Donato Giovanelli (Earth-Life Science Institute, Japan and Rutgers University, USA) and Karen Lloyd (University of Tennessee, USA) will lead a team of collaborators that includes Lloyd’s graduate student Katie Fullerton, as well as collaborator Heather Miller (Michigan State University, USA). They will combine in situ measurements of biologically relevant geochemistry and metabolic activity with ex situ biochemical and molecular tools to investigate the functional and taxonomic diversity of the microbial community within sediments and fluids in the volcanic arc and forearc.

Hummer and de Moor, with collaborators Esteban Gazel and Aristides Alfaro (Virginia Tech, USA), will sample volcanic tephras (solid matter, such as ash, dust, and cinders, that is ejected into the air by an erupting volcano) from Turrialba, Poás, and Arenal volcanoes, which contain abundant olivine phenocrysts with melt and fluid inclusions.

Collaborator Stephen Turner  (Washington University in St. Louis, USA) will use sophisticated analytical methods to track fluxes from the slab to the mantle wedge, helping to delineate volatile sources and the proportion of deeply recycled carbon. Kayla Iocovino  will work to create a box model describing carbon flux at this convergent margin.

Katie Pratt (University of Rhode Island, USA) will document the expedition, blogging from the field and photographing and filming the team in action. Videographers Marcus Lehmann, Brian Cimaglia, Russ Hollingsworth, and Tom Owens, also will join the expedition, creating short films about this novel field investigation.

About the Expedition Logo

For the Biology Meets Subduction expedition, Josh Wood of the DCO Engagement Team worked with the scientists to create a “mission patch” logo. The logo was inspired by similar mission patches created by NASA and IODP. It shows a stylized volcano on top of the Costa Rican subduction zone, with the influence of deep life on this process depicted as microbes in green.

Packing Up and Shipping Out!

With a little under a week to go, the Biology Meets Subduction team members are getting their gear ready for two weeks of field work in Costa Rica.

The field campaign is designed to develop novel connections between microbiology, volcanic systems, and the cycling of living and dead (biotic and abiotic) carbon as Earth’s plates move and subduct past each other. It is a rare opportunity for scientists from all four of DCO’s Scientific Communities (Extreme Physics and Chemistry, Reservoirs and Fluxes, Deep Energy, and Deep Life) to work together in the field, learning from each other and integrating their scientific disciplines in real time.

The team expects this approach will yield a refined understanding of carbon movement between Earth’s surface and interior and the biological and chemical changes that occur en route.  They will visit a minimum of six field sites over the course of 12 days, including Poás and Arenal volcanoes and several springs along the Nicoya and Osa peninsulas.

While the scientists collect their samples, Katie Pratt and a team of videographers will be documenting the entire expedition. We’ll post video and photo updates throughout the trip as part of this blog, and produce several short films when we get back.

DCO Highlights Blog: Updates from the Gulf of Mexico Drilling and Coring Expedition

From 9 May 2017, scientists will sample methane hydrates in the Gulf of Mexico, assessing the…

DCO Highlights Blog: Embers Alight on the Trail By Fire 1.5!

The Trail By Fire crew is at it again!

Regular updates from the Trail by Fire Team, adapted from their blog.