Researchers Investigate the Lighter Side of Earth’s Inner Core

Scientists can generally agree that Earth’s inner core, located more than 5,000 kilometers beneath the surface, is a dense ball of iron with a small amount of nickel. It likely contains lighter elements as well, such as silicon, oxygen, sulfur, carbon, or hydrogen, but researchers have yet to come to a consensus on the identities and quantities of these lighter elements.

Sujoy Ghosh (Indian Institute of Technology Kharagpur, India), a member of the Extreme Physics and Chemistry and the Reservoirs and Fluxes Communities, and colleagues, report that a carbon compound called iron carbide, combined with small amounts of silicon impurities, may be an important component of the inner core. The researchers performed computer simulations to model how an iron and nickel core containing either iron carbide, or iron carbide with some silicon, compares to the density and other known characteristics of the inner core. Adding silicon to the simulation gave the best alignment with Earth’s actual characteristics. The researchers report their findings in a new paper in the journal Geophysical Research Letters [1].

“We are trying to simulate the conditions deep inside Earth, to understand the evolution and composition of the core,” said Ghosh. “Because carbon is abundant and can dissolve in iron, we suggest that carbon is a probable light element in the core. The mantle surrounding the core is rich in silicon and, under the local temperature and pressure conditions, some of that silicon could become incorporated into the core. Silicon and carbon atoms have the same charge, so silicon could easily substitute for carbon in iron carbide.”

Researchers initially put forth a form of iron carbide with the formula Fe3C (cementite) as a potential component of the inner core in the mid-1990s. Computer simulations later ruled out the idea because that form is too stiff at high pressures. More recently, researchers have suggested that iron carbide in the form of Fe7C3 is a better candidate. Fe7C3 molecules have two possible arrangements, a square-shaped orthorhombic phase and a hexagonal phase, and scientists disagree about which form occurs in the inner core.

The researchers compared their results to the Preliminary Reference Earth Model, which represents average Earth properties, including density and the way sound waves generated by earthquakes, called seismic waves, propagate through the core. Much of what we know about Earth’s core comes from studies measuring how seismic waves pass through the layers of the planet. The researchers observed that when they “doped” Fe7C3 by replacing a small percentage of the carbon sites with silicon, the resulting core material had greater agreement with Earth’s properties at inner core conditions. They also noted that the silicon-doped orthorhombic phase produced better agreement than the hexagonal phase of iron carbide.

If the researchers are correct, then Earth’s core is a sizable reservoir of carbon and silicon within the planet, as proposed previously by several DCO researchers, including Bin Chen and Jie (“Jackie”) Li (University of Michigan) and Clemens Prescher (Bayreuth Geoinstitute).

Ghosh is already exploring these results further in the lab, in collaboration with colleagues at Tohoku University and Indian Institute of Science Education and Research-Kolkata. He has combined silicon, iron, and carbon inside an apparatus called a DIA-type multi-anvil apparatus, which can generate extreme pressures. Very soon, however, he hopes to perform this type of experiment at his home institution. Ghosh has already ordered one high-pressure instrument, an end-loaded piston cylinder apparatus, and hopes to acquire a second, a multi-anvil apparatus, soon to complete his lab set up.

“In the Earth sciences community in India, we don’t have high-pressure facilities,” said Ghosh. “This is a huge task, but if I can build a high-pressure lab here, then this would be a big contribution for my country." 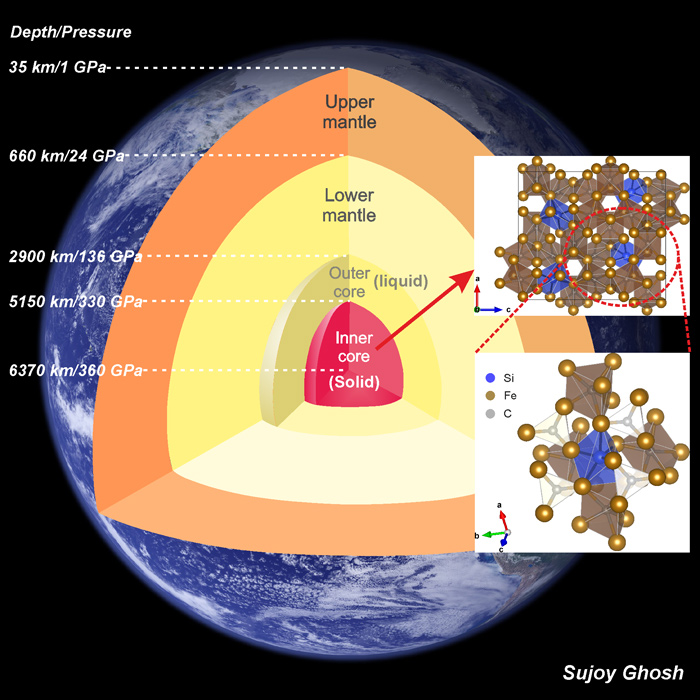 Internal structure of Earth showing the liquid outer core and solid inner core. Silicon-doped Fe7C3, shown at the right-hand side of the diagram, can be a possible carbide phase for the inner core, coexisting with iron. The silicon atoms are blue, the carbon is brown, and the iron is represented by gold circles. Credit: Sujoy Ghosh.

Researchers propose that a planetary body the size of Mars crashed into early Earth, simultaneously…