During the demonstration, the researchers discussed the merits of using such chemostat/reactor systems and their potential for investigating subsurface microbial ecosystems. The enrichment culture used in the process makes isolation of novel microbial components possible, and advances cultivation-dependent “-omic” (biological fields ending in –omics) approaches. Researchers use omics approaches, including metagenomics, transcriptomics and proteomics, to explore unknown mechanisms regarding microbial adaptive evolution and long-term survival in the deep biosphere. After visiting Imachi’s Lab, the Fellows moved to JAMSTEC’s Exhibition Hall where they saw a full-size model of the manned submersible Shinkai 6500 and other JAMSTEC deep-sea facilities. 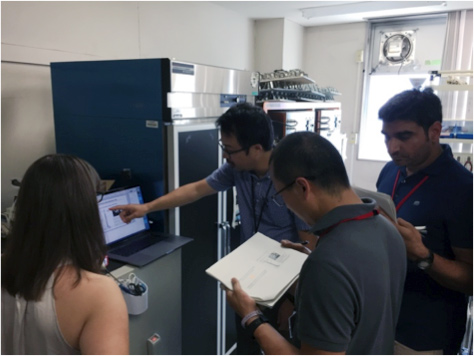 From there, the Fellows boarded the Shinkansen Super-Express train to Shimizu, for a tour of JAMSTEC’s deep-sea drilling vessel Chikyu. On board, Dr. Shino Suzuki, another JAMSTEC scientist who is also a DCO member, joined them.  The group observed as the ICDP Oman Drilling Project Team characterized ophiolite and serpentinites rock cores obtained from terrestrial in Oman. Oman Drilling Project’s co-chief scientists Damon Teagle (University of Southampton, UK) and Eiichi Takazawa (University of Niigata, Japan) introduced the group to the Oman Drilling Project and their on-going work on the Chikyu. Inagaki then showed the group Chikyu’s  core cutting area and microbiology lab, while explaining how quality assurance and quality control are important for microbiology sample processing and core flow.

On 1 August, the group flew from the Chikyu to Kochi to visit the Kochi Core Center (KCC). KCC is a jointly operated by Kochi University and JAMSTEC, and is one of three IODP core repositories, storing legacy cores obtained from the Indian Ocean to West Pacific. At KCC, Inagaki organized a DCO Deep Life-JAMSTEC (Ocean Drilling Science and KCC) joint seminar, during which the three Deep Life Cultivation Fellows presented the following talks:

Abstract: Deep environments in terrestrial bedrock have been considered potential sites for long-term storage of hazardous waste such as spent nuclear fuel. Radioactive waste contains metallic materials and microorganisms known to be able to accelerate several types of corrosion of metallic materials. As a consequence of corrosion of the metallic waste, radioactive nuclides may be released into groundwater and transferred to neighboring areas of the repository. Highly diverse and numerous populations of microorganisms have been detected up to thousands of meters below the surface in groundwater in terrestrial bedrock in Finland including the repository area. Understanding the metabolic activity of deep groundwater microbial communities and their response to changing environmental conditions is of profound importance to the long-term safety assessment of hazardous waste disposal in deep subsurface sites. The activity of microorganisms attached to the surfaces and the properties of formed biofilms are essential factors when considering the possibility and long-term effects of microbially induced corrosion.

Abstract: Organohalide-respiring bacteria play key roles in the natural chlorine cycle; however, most current knowledge is based on cultures from contaminated environments. We demonstrate that grape pomace compost, without prior exposure to chlorinated solvents, harbors a Dehalogenimonas (Dhgm) species capable of using chlorinated ethenes, including the human carcinogen and common groundwater pollutant vinyl chloride as electron acceptors. Dhgm are likely greater contributors to reductive dechlorination of organochlorines than is currently recognized, and non-polluted environments represent sources of organohalide-respiring bacteria with novel reductive dehalogenase genes.

The Deep Life Cultivation Fellows ended their time in Japan at a wrap-up meeting with Fumio Inagaki, followed by a wonderful dinner with JAMSTEC contributors. All agreed to strive to accelerate deep life cultivation using bioreactor and electro microbiological techniques through international collaborations within the DCO science network.